No softball, no problem. Big at Bat Ballgame allows you to still enjoy the fun of friendly ball playing competition. You can play solitaire or up to 18 players. Great family game!

There are two versions available:

Big at Bat Ballgame (Rookie Series)- This is the original version. Player cards have names on them to represent ballplayers of the past. Player Card Examples: 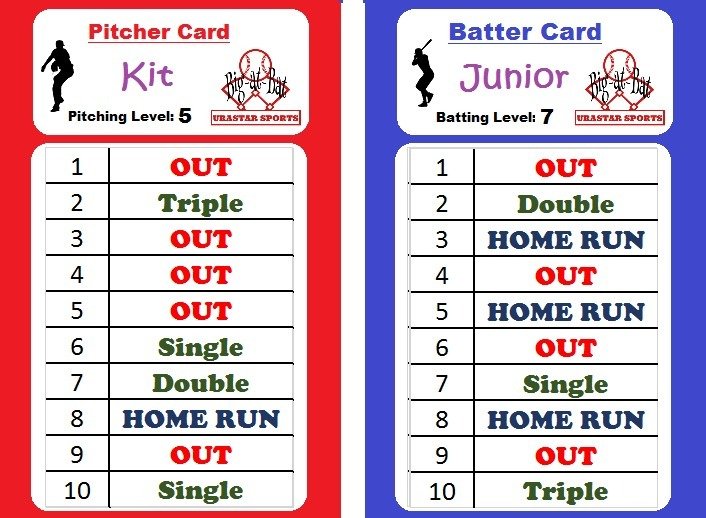 Big at Bat Ballgame (Take 2)- Player cards in this version only have a number. Victory Cards are different from the original version. There are other slight differences, but the rules can be applied the same. 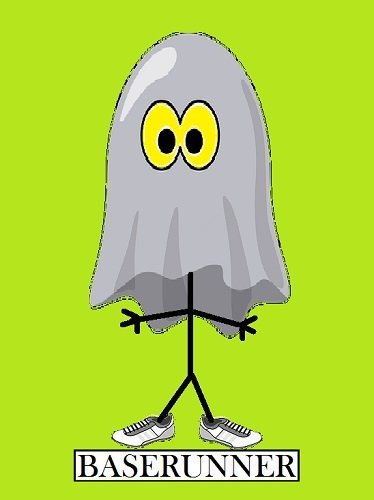 As far as official rules- Use your imagination. You can play Big at Bat Ballgame with any rule agreed to.

> Have unequal number of players on team.

> Play with large group with up to 18 players. Each having a player card.

> Examples for games are given in the Rules but you can play any amount of inning you agree to.

> Bat in order you wish per inning. Or, have a lineup and keep that lineup throughout the game.

> Have your best pitcher stay in for entire game. Replace the pitcher at any time.

Use the rules below as guidelines only. There are limitless ways to play Big at Bat Ballgame. Play ball and have fun! 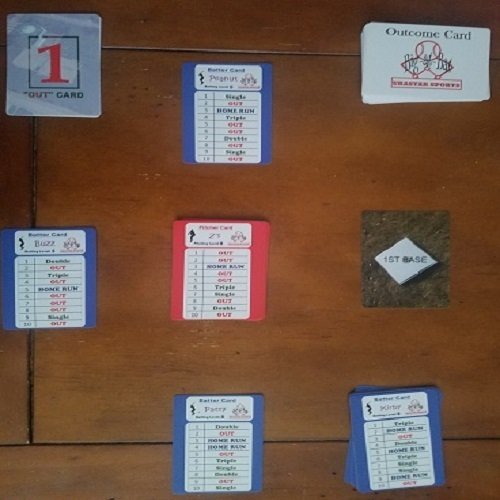 How to Play the Big at Bat Ballgame

This crazy fun baseball simulation card game takes you back to a time in the past when ball playing was a real blast. Ballgames back then were played in the backyard, sandlot field, parking lot or any park where bases could be thrown down to play ball. The balls were made of rubber, plastic or any round bouncy object that could be found. Bats were of different forms and sizes also. Friends got together and played till the sun went down. 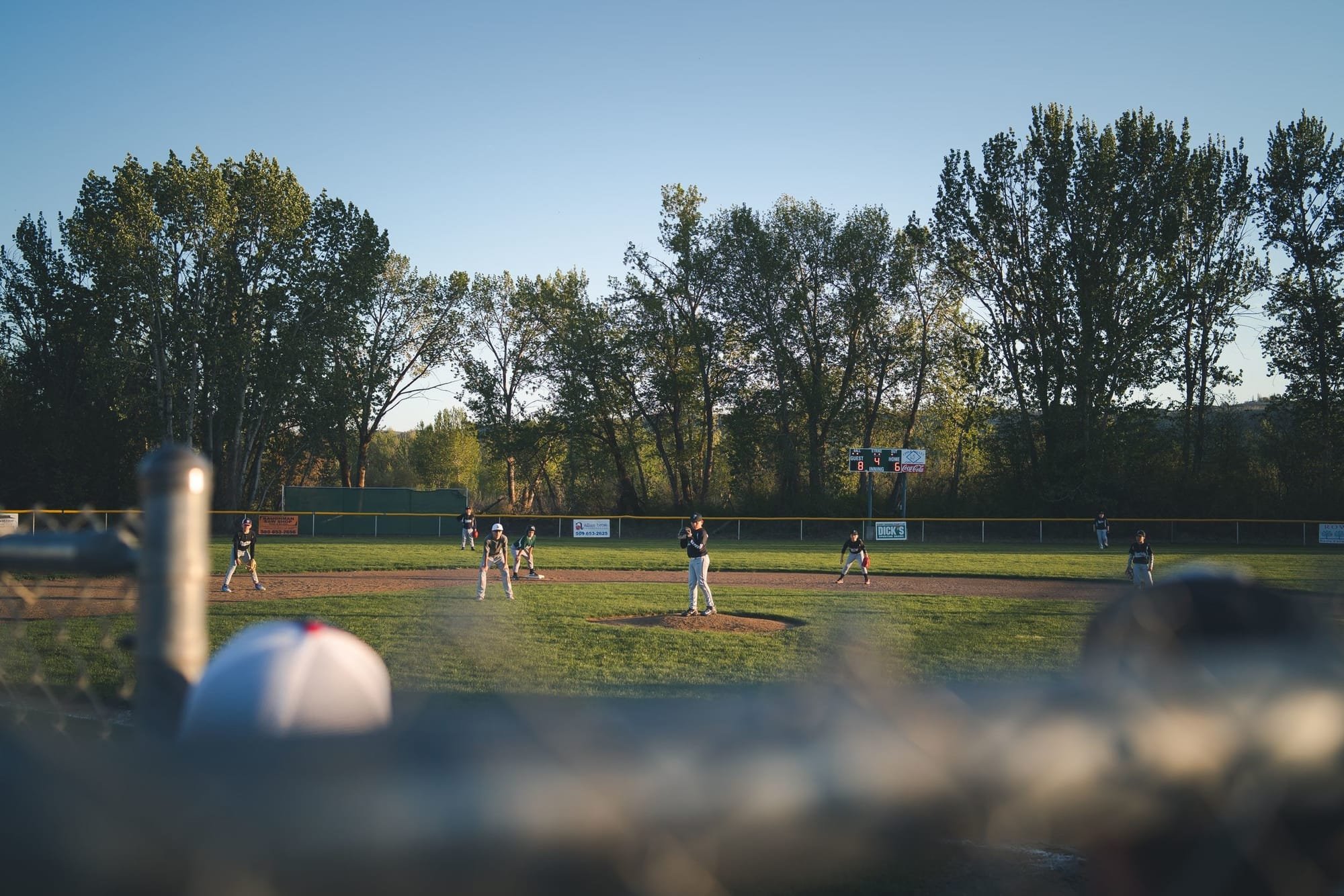 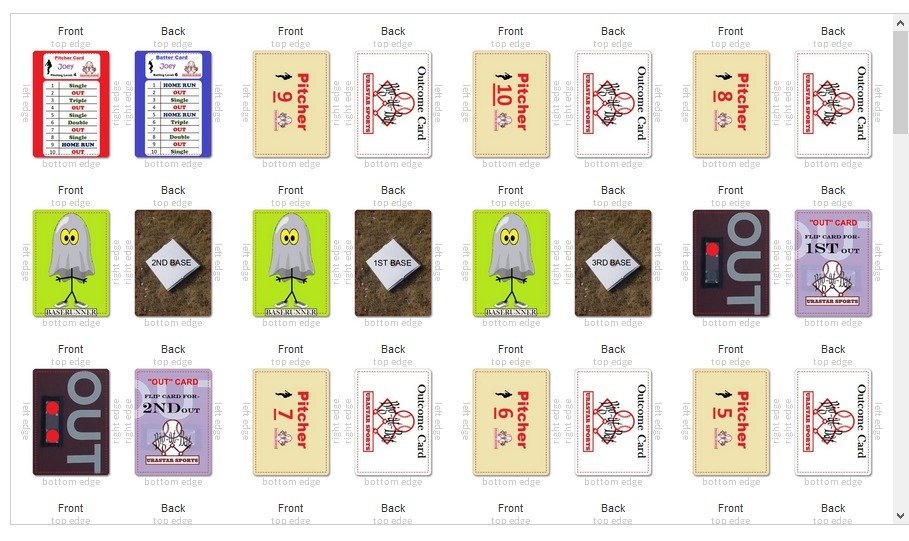 Baserunner Cards (3)- Set cards base side up and create 1st, 2nd and 3rd base for the Big at Bat game field. When a Big at Bat matchup outcome results in a hit reaching base, the card for that base is flipped over to represent a Baserunner (stick-man ghost runner).

Out Cards (2)- Each team gets 3 Outs per inning. Keep track of Outs with these cards. Start by putting them face down and flip over when there is an Out.

To begin, Managers decide the number of innings to play. Check out Game Choices for examples. Next, Managers agree on how many Big at Bat ballplayers they want per team (1 to 9). See Big at Bat Team Size for more details on this. Flip a coin to determine who will draft first. Winner of flip is first to draft. Each Manager then alternately selects Big at Bat ballplayers for their team.

The Manager that won the flip to draft first becomes the visiting team and bats first. They put their Batter Cards (blue framed) facing up, stacked in a pile. The other Manager places all Pitcher Cards (red framed) piled faced up. Managers stack in a pile Big at Bat ballplayer cards in any order they choose. This create a lineup that cannot be changed throughout the whole game. The first card in each stacked pile will become the first Big at Bat matchup, pitcher vs batter placed side by side. The manager that has the Batter Card flips a Big at Bat outcome card over to determine outcome result. See Big at Bat Matchup for examples.

Once needed moves are made, Batter and Pitcher Cards along with Big at Bat Outcome Cards are placed under their respective piles to continue play. Top player cards from each team are then placed side by side for the next Big at Bat matchup. Process is continued until 3 Outs are obtained. Baserunners advance on safe hits, 1 base for each runner for a Single, 2 bases for a Double and all baserunners on base score on Triple and Home Runs.

After 3 Outs, the Manager of the batting team records their score for that inning. Then the batting team becomes the pitching team by flipping their entire pile of player cards to show Pitcher Card side up. Likewise, Pitching team manager flips over his pile of player cards to show Batter Card side up. Managers keep track of score and innings on separate piece of paper. Play any amount of inning you choose. Winning Manager is awarded a Big at Bat Victory Card!

Let’s say “Patty” is Batter against Pitcher “Buzz”. The Big at Bat Outcome Card is flipped over, and the card has “Batter - 7” on it. Reading down the list of 10 possible outcomes on the “Patty” Batter Card down to the number 7 the result for the Big at Bat Matchup would be - “Single”. Manager would flip over Baserunner card in 1st base position to simulate a Baserunner on base. Should Big at Bat Outcome Card flipped over have “Pitcher - 5” on it, reading from the “Buzz” Pitcher Card the result would be an “OUT”. Manager for pitcher would then flip over 1st Out Card to signify the 1st Out. So, Manager with Batter Cards keeps track of baserunners and score for his team. Manager with Pitcher Cards keep track of outs.

Time for Lunch Game (1 inning)- This is the short game that we all have played where it only lasts one inning because some of the players are called home because it’s time for lunch.

Backyard Game (3 innings)- Popular for those backyard games played in your neighbors’ backyard.

Sandlot Game (5 innings)- This game is played out in an imaginary sandlot or local park.

Play a Big at Bat World Series. Best of 7 Games. Winner take all!

All 2 player game rules apply for Solitaire game play with one exception. For the Big at Bat players draft choose 1 of 2 options-

Take all the Big at Bat player cards and shuffle them. Then create 2 teams (your choice of 1 to 9 players per team) by dealing out 2 piles of player cards equal in number.

After your Draft, play out game as stated in the 2 player game play rules. 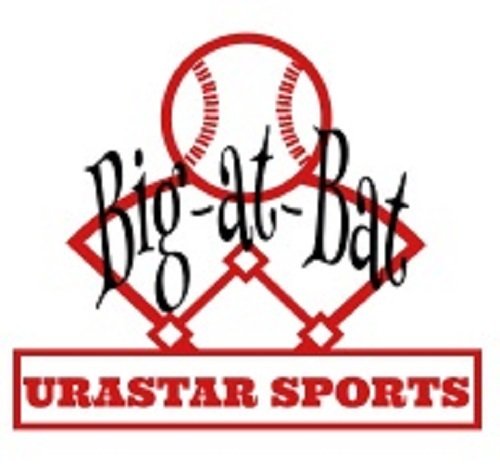